1) What fine part of the world are you reading from today?

2) Which book in your stack are you most looking forward to?

3) Which snack are you most looking forward to?

4) Tell us a little something about yourself!

Lord, it’s too early yet and I haven’t had enough coffee. 😬

This isn’t my first readathon, but it’s been a year or two since I’ve joined in the fun. 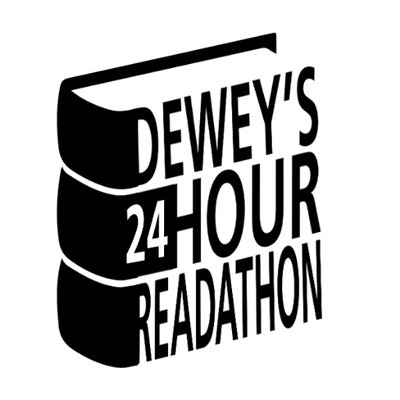 It’s that time of year again. Time to participate in the Dewey’s 24 Hour Readathon. Admittedly, its been a year or two since I’ve taken part in it, but I’m looking forward to getting back to it. There are some big changes ahead for the readathon and you can read about them here.

I’m planning to use this readathon to read books for the various reading challenges I’m taking part in this year and finishing up some of the books Ive started but have left languishing on my currently reading shelf on GoodReads. I have so many right now, too. So, yes, I’m more interested in counting pages than books this time around.

I’m also planning to do one or two big updates here on my blog.

I decide just a day or so ago to do this readathon, so I don’t have any yummy snacks planned. And I’m hesitant to go to the grocery store just for a bag of chips and Reese’s Peanut Butter Cups during this pandemic, so I may make cookies or something to treat myself with during my reading.

So join me and the rest of us who are honoring Dewey with this readathon tomorrow. Hope to see you out there!

Here are some links to my previous Dewey’s readathon posts:

Count Down to Dewey’s 24 Hour Readathon

Let me know if you joining in and leave a link to where you are updating your reading in the comments below so I can stop by and cheer you on.

I am re-posting this in honor of National Bookmobile Day.

In honor of #BookmobileDay2018, I am re-posting the tribute I wrote last year.

As a part of National Library Week, today is National Bookmobile Day in The United States. And as a lifelong reader and supporter of public libraries, I just want to celebrate my  love of bookmobiles and the librarians who run the. For many in rural communities, bookmobiles are the only way to access library books. And I wanted to remember the  bookmobile librarian that helped me become the reader I am today.

I grew up in a tiny community in the rural West. It was miles from everywhere. The nearest town with banks, grocery stores, and a library was a 30 minute drive—in good weather. So my first exposure to a library and library books was the bookmobile. The bookmobile came to our house twice a month, every other Wednesday. Mr. Riggs, the librarian, would park…

I think one of the things I’ve been so impressed by during this self isolation/quarantine/shelter-in-place world is the creativity and talents of so many people. The amount of singing and dancing shared by everyday folks  across the various social media platforms is just amazing. And many celebrities are getting in on the action while they are stuck at home, too. For instance, Patrick Stewart is reading Shakespeare’s sonnets everyday & posting the video on Twitter.  And LeVar Burton of Reading Rainbow fame is reading aloud, mostly children’s stories, on Twitter, too . But the one I most look forward to is Jennifer Ehle reading Pride and Prejudice on her Instagram stories and on her You Tube channel.

Jennifer Ehle is, of course, my favorite Lizzy Bennet. She plays Lizzy in the beloved 1995 version which also stars Colin Firth as Mr. Darcy. I know there are arguments across the internet about who is the best Darcy (Colin Firth, obviously), but for my money, the best Lizzy Bennet is Jennifer Ehle. So, for me, to listen to her read P&P is just perfection. But make no mistake, this is not a slick professional production. It is Jennifer reading in different rooms of her home while kids, cats, and dogs make noise in the background. It’s Jennifer reading in her car at a park. And her dog, Violet, either just back from a walk or waiting patiently, mostly, to on a walk. And it’s just charming. I can’t recommend listening to her reading enough.  And I think I’ll have to pull out my DVDs of the 1995 version and have myself a P&P bingeathon.

Are their other celebrities or regular folk reading out there on the internet that I should check out? Let me know in the comments below.

When a woman conceals her sister’s death to claim their joint inheritance, her deception exposes a web of dangerous secrets in this addictive new thriller.

“Like most of the dead, I want to be remembered.”

Robin Voigt is dead. If Leslie had arrived at her sister’s cramped Las Vegas apartment just hours earlier, this would have been their first reunion in a decade. In the years since Robin ran away from home as a teenager, Leslie has stayed in New Mexico, taking care of their dying father even as she began building a family of her own. But when their father passed away, Leslie received a rude awakening: She and Robin would receive the inheritance he left them together—or not at all. Now her half of the money may be beyond her grasp. And unbeknownst to anyone, even her husband, Leslie needs it desperately.

When she meets a charismatic young woman who bears an uncanny resemblance to Robin—and has every reason to leave her past behind—the two make a reckless bargain: Mary will impersonate Robin for a week in exchange for Robin’s half of the cash. But neither realizes how high the stakes will become when Mary takes a dead woman’s name. Even as Mary begins to suspect Leslie is hiding something, and Leslie realizes the stranger living in her house, babysitting her newborn son, and charming her husband has secrets of her own, Robin’s wild, troubled legacy threatens to eclipse them both.

That opening line! I think I have a new favorite to use next time someone has a first line challenge on Bookstagram. I like that this focuses on the fraught relationship between sisters. I think it’s a new take (at least to me) on this genre. I like the three points of view from which this story is told. Of course all three are unreliable, but it’s fun. I guessed one twist early on, but I think anyone who spent any time watching soaps on network TV in the 70’s and 80’s will guess it. And finally, i think it is well written. If this is the first novel, Tanen Jones did a great job and I look forward to reading more of novels in the future.

I can’t really think of anything I didn’t really like about this novel.

It’s been a couple of weeks since I read this, but nothing stands out  other than the twist that I don’t want to give away in this review.

Yes! This is a perfect read for summer vacations and self-isolating?

Have you read The Better Liar? What do you think of it? Let me know in the comments below.

I participated in the 24in48 Readathon #Stayhome24in48 and read 4 books.

Things I’ve read on the internet:

Is there anyplace we can escape discussion of The Tiger King? Apparently not. Why Joe Exotic is Guilty

That was my reading life  in March. How was your reading life? Let me know in the comments below.

It’s time for another readathon. Yes, I just finished one readathon and am getting ready to start another. And it is The O.W.L. Magical Readathon hosted by Book Roast over on You Tube. It runs from April 1st to April 30th. And as with all of my reading challenges and readathons I am focusing on reading books on my TBR pile. It is a Harry Potter themed readathon that is in two parts. The O.W.Ls are in April and the N.E.W.Ts are in August. Basically, like Hogwart’s students, you sit  “exams”/prompts that correspond to the career you have chosen in the Wizarding World. Rather than trying to explain it all myself, do click on this link and watch Book Roast’s You Tube video which explains the readathon in detail.

It may seem daunting at first, but when you read through the Wizarding Careers Guidebook it all begins to make sense. The career I’ve chosen is Seer. For my O.W.L exams I must complete three “exams” (prompts). And I have also chosen to add on a certification for Mermaid Linguistics which requires me to sit for one more exam. So all together I have four books to read in the month of April.

So here is my list of exams and the book I’ve chosen for that prompt.

After seeing all the work Book Roast does for this event and how creative it all is, it just makes me more excited about participating. She put together such a fun event. I will include links to the videos and google documents below so that you download and print what you need.

Here are a list of links to most everything you need for this readathon:

Be sure to look at the video notes for links to Instagram and Twitter for Book Roast and the Magical Readathon. What do you think? Do you like readathons and have you participated in this readathon? Let me know in the comments below.

Lifelong reader with a dog and a coffee

Adventures with great novels around the world

Idle thoughts on books and movies. Some new, but mostly old.

The Book Stop
Coffee and Cats
Blog at WordPress.com.